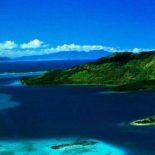 Celebrate Your Life – Experience the World

Grace on the Fly: NW Women Wade into Fly Fishing 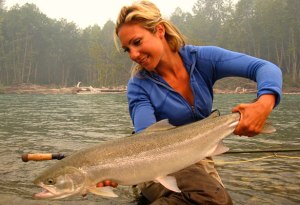 Knee deep in her waders, she whips the rod back, hesitates a second then casts it forward – a delicate presentation resulting in dropping the fly into a perfect drift. The cast is poetry in motion and the trout rises to snatch the fly. It’s another perfect day on the river, tranquil, away from everything and everyone.

It seems like women are fly fishing everywhere now. Drivers can spot the solo figure of a woman casting from a sandbar in the greyish glacial waters of a tributary off Chilkoot Lake near Haines, Alaska. Heading across Steven’s Pass in Washington State, the occasional female form stands along shore of the swiftly running waters. In both Oregon and Montana, the rivers are full of anglers, many of them women.

Once the domain of men, women are stepping into the world of fly-fishing seemingly wherever a river runs, and especially where a campfire or even a spa awaits at the end of the day.

Never mind the mosquitos, the cold, the drizzling rain, women who are comfortable outdoors now make up the fastest growing population of newbie fly fishers. As a result, schools are catering to women, resorts are offering more amenities for women fly fishers, women-only trips are full months in advance, and gear manufacturers now make graphite rods and design boots and waders to fit a woman’s shape, making life on the water safer and more comfortable. The times have never been more favorable to women who have not yet taken that first step towards the water.

Women have always been involved in the sport. As fly-fishing evolved over the centuries, women’s achievements and advancements in fly tying, equipment development, art, literature, and conservation were recorded for posterity. Yet those of their male counterparts often overshadowed their accomplishments. Fortunately, The American Museum of Fly Fishing created a new exhibit available online to inspire women around the world. “A Graceful Rise” was designed to highlight the stories of these pioneers and explore how they inspired and influenced those who followed in their groundbreaking footsteps.

It is well worth the time to check out the website and get inspired. You will be surprised by the names you see – politicians’ wives such as Rosalynn Carter, actresses like Ginger Rogers, Heather Thomas and Oprah Winfrey, award-winning competitors in a once male-only sport, and artists who tie stunning realistic flies that are now collectors items.

A new revival in women fly fishers seemed to launch after the 1992 release of the movie “A River Runs through It”. Women became captivated not just with Brad Pit, but with his double standing in the river, a long line undulating in the sky above him in gentle arcs before a flick straightened it into a perfect forward line. The movie stirred both genders to learn the art of fly-fishing. Men rushed to fly fishing stores. Women, however, are slowly increasing their presence in fly-fishing schools across the nation.

Where Women Learn to Fish

Partly art and mostly form, the intricacies of fly fishing can take years to learn. Casting techniques vary as much as the type of fly needed during certain seasons and locations on northwestern rivers. But don’t let that stop you from enjoying the beauty of entering into your own private spot on a river. Learn the basics and then place a vacation message on your email address that reads, “Gone Fishing”.

Where women learn to fish is often alongside men in the Orvis sponsored weekend fly fishing schools. According to Dan Gracia, Sporting Specialist with the Orvis Company, “It used to be about 10% of the class were women coming to learn with their husbands. Now it’s about 30% women in class and many of them solo.” Gwenn Perkins, director of Orvis Women’s Outdoor Program and a nationally recognized fly-fishing instructor believes that number is quickly rising to about 40%.

Orvis offers a 2-day fly-fishing school across the nation during the summer months. Tucked away in some of the most beautiful scenery in the Pacific Northwest is the popular vacation town of Coeur d’Alene, Idaho. Many Orvis schools are held at the conveniently at the Coeur d’Alene Resort right on the lake. Other courses are perfect for the vacationing couple in the Bozeman, Montana area. Orvis is also offering a new school that focuses on learning to hook the Pacific Steelhead and is held in September at Morrison’s Rogue River Lodge, located 16 miles downstream from Grants Pass along the banks of the famed Rogue River. The Lodge is only open in the summer and is famous not only for fly-fishing, but for the Rogue’s outstanding white water river rafting.

Some women find is easier to learn in women-only groups and many individuals and organizations are catering to that desire.

Noted-fly fishers of this current generation include April Vokey of Fly Gal Ventures in British Columbia, Canada, a region known for its giant steelheads during the winter and summer runs. April leads classes and trips in located in various parts of BC – Chilliwack, Smithers and Bella Coola – as well as around the world for both men and women. In fact, she is quick to state that she will talk about fly-fishing only in gender-neutral terms. Recently married and constantly pestered to work on writing and film projects, April is the fastest rising star of women’s fishing. Her courses are reputed to be excellent. “Most of our courses are dry-land classes that take no more than 4 hours to complete, while many of our workshops are designed as weekend getaways that last several days.”

While the beauty of the river calls during the day, the nights are for relaxing. Some groups are known for sitting around a campfire in the company of other women, cigar in one hand, gin and tonic in the other, swapping fish tales and laughing at the snags of line and life. Other trips cater to those who like life a little less rustic at the end of the day. Two of the best-known operators include Sisters on the Fly and Reel Women Fly Fishing Adventures.

Sisters on the Fly

Sisters on the Fly is known for the camaraderie of those who like to camp and fish in comfort. They circle their campers in various summer events, fish and hang around a campfire. For those who don’t have their own tricked-out camper, Sisters on the Fly also offers schools and trips for women in Oregon, Montana, Yellowstone that are resort-based.

They also host Couples fly-fishing retreats and the famous Cowgirl Sister Retreat that gives women the opportunity to not only fish, but also ride horses and drink wine at the Cowgirl bar.

The NW has plenty of opportunity for women of all ages to get out on the river by day and enjoy the company of others in the evening. Fish on!

Photos courtesy of The American Museum of Fly Fishing.

J “Kat” Loren is a recent convert to fly fishing and is an avid explorer of the beauty of life. Her travel articles have appeared in national magazines. J “Kat” Loren is also the author of more than a dozen books. She currently focuses on writing health, fitness, ocean conservation and travel articles.  Her blog “Crazi Culture” is a popular read among those who like eclectic topics and travelogues about odd places and adventures. http://www.craziculture.com Jloren.biz@gmail.com

“Grace on the Fly” is part of the women and fishing series by J. “Kat” Loren. The original article was commissioned by NW Travel Magazine and will run in their March/April 2015 issue. See http://nwtravelmag.com.

© Crazi Culture / Blue Moth Media, 2014 – 2020. www.bluemothmedia.com Unauthorized use and/or duplication of this material without express and written permission from this blog’s author and/or owner is strictly prohibited. Excerpts and links may be used, provided that full and clear credit is given to J Kat Loren & Crazi Culture with appropriate and specific direction to the original content.

© J Kat Loren and Crazi Culture / Blue Moth Media, 2014 – 2020. Unauthorized use and/or duplication of this material without express and written permission from this blog’s author and/or owner is strictly prohibited. Excerpts and links may be used, provided that full and clear credit is given to J. Kat Loren and Crazi Culture with appropriate and specific direction to the original content.